The Transportation Engineering and Operations Bureau manages approximately 300 signalized intersections in the County, with 180-plus traffic cameras located at critical intersections.

The Traffic Management Center is supported by a 45-mile fiber optic network system throughout the County.

We began converting traffic signals to light-emitting diode (LED) technology in the mid-2000s. These LEDs modernize the network, reduce overall costs and minimize the environmental impact.

Traffic signals provide orderly movement of traffic by assigning rights of way at intersecting streets. They’re usually very effective, but can be inefficient and potentially dangerous to motorists and pedestrians when installed under inappropriate conditions. Signals that are installed when no legitimate need exists often generate an increase in vehicle stops, traffic delays, fuel consumption, traffic accidents and non-compliance.

Installation of traffic signals is preceded by a thorough engineering study. The U.S. Department of Transportation Federal Highway Administration (FHWA) has published the Manual on Uniform Traffic Control Devices, which contains the standard guidelines for all traffic signals in the United States, including Arlington. The federal standards for traffic signal installation are located on the FHWA’s website.

Traffic signals are constantly being replaced as they age beyond their lifespan or as capital improvement or developer projects require. The County has specific requirements regarding traffic signal construction activities. Please visit Arlington’s Traffic Signal Specification Updates page for the latest information on these requirements. The County rebuilds several signals each year as part of a signal replacement initiative (Capital Improvement Project) to replace aging infrastructure. Please refer to the project webpage for details regarding active projects.

The traffic signal system is configured to improve traffic flow and reduce vehicle emissions by continuous monitoring and optimizing of traffic signal operations based on real-time traffic conditions. The system manages traffic flow in Ballston and Pentagon City, and along Arlington Boulevard (U.S. Route 50), Columbia Pike and Lee Highway (U.S. Route 29). Additionally, the system supports emergency evacuation and special event situations. All traffic signals have a backup power supply in the case of power failure.

Closed-circuit televisions (CCTVs), or traffic cameras, are used throughout the County to detect congestion and notice accidents. There are currently more than 200 CCTVs located at critical intersections.

A HAWK Beacon (High-intensity Activated CrossWalK) is a device that assists pedestrians and bicyclists safely across busy streets. While different in appearance to the driver than as seen by the pedestrian or bicyclist, HAWKs work the same as button-activated traffic signals. A HAWK stops traffic with a red light, allowing pedestrians and bicyclists to cross safely. At rest, a HAWK remains dark. A HAWK can be triggered automatically or manually with the push button. It will then go through a series of yellow and red sequences requiring motorists to slow down and stop. When the red lights begin flashing, motorists can proceed if the crosswalk is clear in front of them. After pedestrians and  bicyclists finish crossing, the HAWK will go dark again, allowing motorists to continue through the intersection.

Eight VMS are located on Arlington Boulevard (4), Columbia Pike (2) and Lee Highway (2). The first two signs (installed on Arlington Boulevard near the Washington Boulevard interchange) display traffic alerts, such as “congestion ahead.” The other six signs use media access control identification technology to communicate real-time travel information to motorists estimating travel time from the sign location to the County line. These VMS will also be used for incident management and the Amber Alert system. 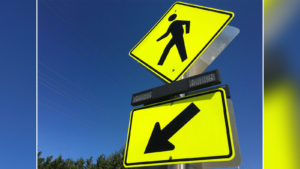 Rectangular Rapid Flashing Beacon (RRFB) is a set of high-intensity yellow lights, mounted below the pedestrian warning sign, adjacent to a crosswalk. When a person on foot approaches the crosswalk, he or she presses an accessible button which activates multiple sets of yellow flashing lights and quickly signals to drivers that they must yield to the crossing pedestrian.