Vision Zero begins with good data and transparency. As part of developing the County’s Vision Zero Action Plan, County staff will use a proactive, data-driven approach to better identify and address the top risk factors before they result in a fatality or serious injury.

The County collects and analyzes data to understand trends, patterns, and systemic safety issues: for example, the locations where fatal and serious crashes have already occurred, how safety interventions are performing, and the neighborhoods/populations disproportionately affected by safety risks. In turn, the findings of the data analyses guide public education, priority actions, and funding.

Throughout the Action Plan process, the County’s data, analyses, and progress reports will be readily accessible to the community to ensure that the Vision Zero effort is transparent and meaningful. Read below to learn more about the data analysis efforts available to date. 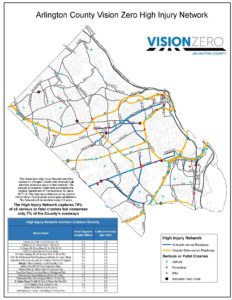 Arlington County staff mapped all serious and fatal injury crashes across for the 2017-2019 three-year reporting period. Based on the location of these critical crashes, we identified what Vision Zero safety professionals call the “High-Injury Network” – the corridors with where critical crashes are concentrated. In Arlington, the High Injury Network represents just 7% of over 555 miles of roadway in Arlington County, but these corridors saw 78% of all serious or fatal crashes reviewed in our research.

Arlington County staff reviewed all critical crashes – those resulting in serious or fatal injuries to one or more people involved – in detail over three-year reporting period from 2017 to 2019. There were 178 critical crashes in Arlington during this time period, out of a total of 7,549 reported crashes.

When we focused our analysis on critical crashes by mode, we learned that:

It is important that our Vision Zero program focuses on these vulnerable road users like pedestrians, bicyclists, and motorcyclists, because they are more likely to sustain a serious or fatal injury if there is a crash.

All this information helps us to understand where to prioritize our efforts to reduce the number of severe or fatal crashes in the County. 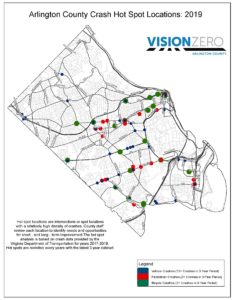 Arlington County also conducts an annual analysis of “hot spots”, or locations with high concentrations of crashes. Hot spots are identified for vehicle, bicycle, and pedestrian crashes. County staff review each location and identify/add safety improvements that will reduce crashes. While the hot spot program does not focus specifically on serious or fatal injuries, it allows County staff to reduce the overall number of crashes—and thus the likelihood of each crash being severe.

Go back to the Vision Zero project homepage.